Ending the year with a heavy heart 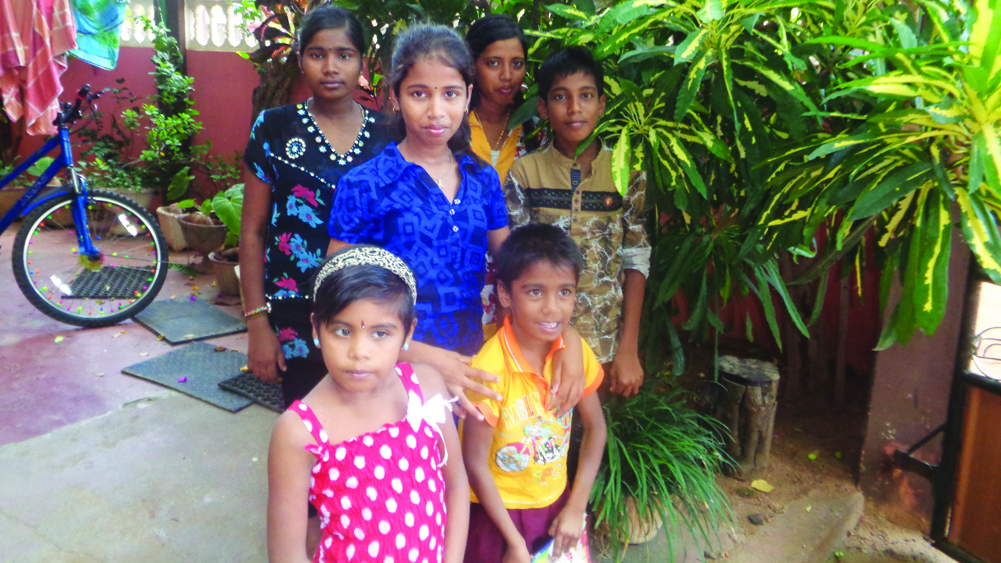 Anusha, Cindy, Shaktivel, Kallaimathai, Anandan, Kallaivani who were among the children taken from the home

S. Jeyakanth reports on an eventful 2019 when the churches experienced much blessing with more baptisms, the opening of three new church buildings and a joyful family conference. However it was also a year of trials particularly at 6 Mile Post.

Thank you for your prayers and support during a difficult year. In 2019 we experienced much blessing but it has also been an unsettling year for our people following the Easter bombings, along with the drought and recent floods and the election of Gotabaya Rajapaksa as president. His return to power makes our Tamil people fearful. He and his brother Mahinda Rajapaksa were accused of the brutal killing of over 100,000 Tamils in the civil war.

Months of drought, followed by recent flooding have caused much hardship to our people who mainly live off the land. We commit these trials to our Heavenly Father, trusting His good purposes.

At the beginning of August, we held a family conference at 6th Mile Post with almost 700 attending from several churches. It was a joy to see so many believers listening to God’s Word from morning till evening. On Sunday morning, we all went to the seashore for a baptismal service. Ten brothers and sisters from different churches confessed their faith and went into the water to show their commitment to Jesus Christ. Please pray that they might grow in their faith and be good witnesses for Christ in their daily lives.

An encounter of joy and pain

We are very concerned about the children who have been forcefully taken from the Children’s Home by the Child Protection Officer and kept in a Hindu Home. In total, 10 children have been brought there, including six children from one family. God granted us the opportunity to meet these children. When the school holiday started, they were able to join the Family Conference at 6 Mile Post and stayed with us for a few hours. What they told us made us want to cry. The wardens are hash: they often beat them and they do not care for them properly.

They do not allow them to come together for prayer and regularly search their cupboards for bibles. On one oc-casion they threw a bible belonging to Shaktivel into the fire. They also take the children to a Hindu temple every week against their will. Let us continue to pray for these children, that they would remain as faithful as Daniel was in a foreign court!

Their wider family, who are Hindus, are fearful of removing the children from the Hindu Home as they have been threatened if they do.

For two years, the home has been the object of false accusations by a former worker, leading to a court case. The case has repeatedly been postponed, a typical situation in our country. The accusations illustrate the system-atic pressure on Christians and other minorities.

Sadly two LEFC workers, George and Mariyadas, who had no direct connection with the Children’s Home, have recently lost a court case accusing them of raping two mentally retarded girls eight years ago. The judgement was a big shock as it had already been thrown out at the Magistrates court.

The girls’ mother was a Christian, but was mentally disturbed and committed suicide by setting fire to herself, after which the girls came to the Children’s Home. The girls’ behaviour was uncontrollable and because of their violence towards other children, they were withdrawn from both their school and the Children’s Home on the advice of Social Services. Their father looked after them in a separate house at 6 Mile Post, where the rapes are alleged to have happened. The case was brought by their mother’s sister, who hoped, it seems, to make money from an out of court settlement with George and Mariyadas. They refused this as they knew they were innocent. Earlier she had also falsely accused their father of rape as she wanted to take her sister’s land from him. Sadly he died in prison while awaiting trial.

“For two years the home has been the object of false accusations by a former worker.”

This aunt with whom the girls are now living made these accusations because she was very angry George had helped the girls’ father fight to keep his wife’s land and that Mariyadas had shown great kindness to him. A police enquiry found no evidence for the rapes so the case was dis-missed. However she contacted some enemies of LEFC including Ps. Murali, who wrote many letters to the judge criticising the Children’s Home using different pseudo-names. It appears the judge has been taken in by the falsehoods. I firmly believe they are innocent. The accusations were made long after the supposed rape by high-ly impressionable mentally unstable girls. In addition close Christian neighbours living either side of their house heard nothing amiss.

At court the judge spoke about how the Christians at 6 Mile Post are trying to force Hindu children to convert and he was generally very antagonistic to the work. Opponents have been using social media to circulate the judgement to try to discredit the work at 6 Mile Post. The men are facing 10 years in prison and a fine of £2,500. The families plan to appeal to the Supreme Court.

The judge said the man overall in charge of 6 Mile Post i.e myself, is culpable as well. The implications of this are unclear. In spite of all of this the grounds are full of life, and every day more than 50 children come to get their meals here. Every morning our nursery programme is conducted which is greatly appreciated by local Hindu village families. We do not only offer education and a meal, but also teach Bible stories to the children. We are so thankful for this opportunity. Please pray for this ministry and for the teachers.

I have laboured for almost 33 years in the Lord’s work. I have some health issues and am always tired. By the Lord’s mercy, we are running the race with faith and perseverance. Sometimes we are brought low by obstacles and weariness, but His living Word raises us up and gives us strength to go on.

Vani often suffers physically with costochondritis, but she is always busy. In her role as my personal secretary, she replies to my emails, types my notes, prepares translations of church reports and projects, proof reads translations and makes preparations for medical camps.

As Jemima is at university, we can now extend our time in Sri Lanka and Vani joins me each time I go.

Your prayers and support are greatly appreciated.