A great joy and privilege 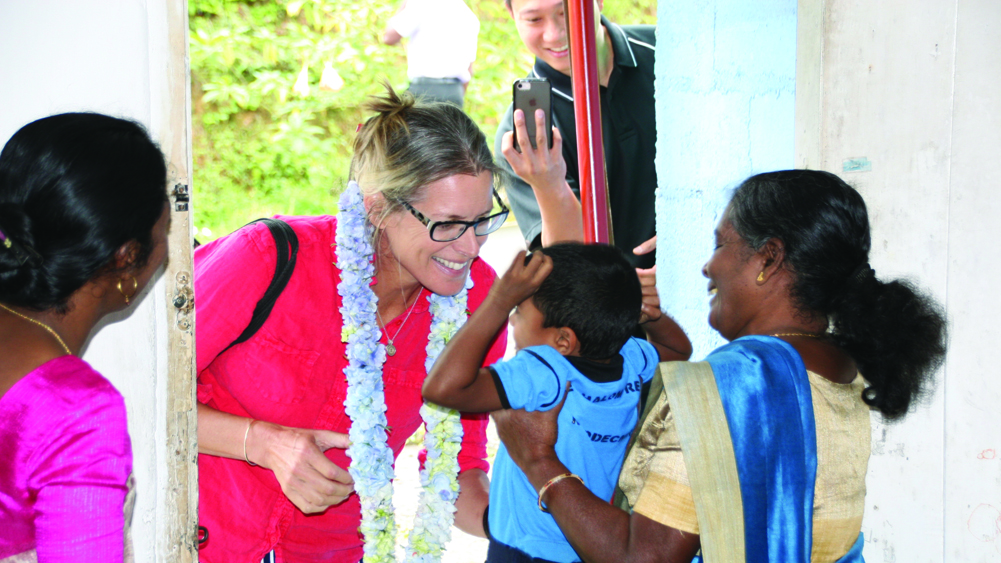 In her first visit to Sri Lanka Jamie O’Connor recounts her experiences and the impact the godly believers had upon her.

Against all earthly wisdom, ‘odds’ and circumstances, my son and I landed in Colombo to spend a week among the churches of the Lanka Fellowship. We travelled with Pastor B.S. Poh and his wife, Goody, who have been visiting the churches in Sri Lanka for many years.

At the airport, we were met by Pastor Jayakanth, and soon nine of us filled a van: three from America, two from Singapore, two from Malaysia and Gary Donaldson, who assists Care Sri Lanka in the UK. For the remainder of the trip, we seemed to be in the midst of a ‘cloud of witnesses’ — a team of godly men providing help and care – the people we were supposed to be helping! These cheerful, serving, kind, dedicated, men whom the Lord has saved over the years, accompanied us round the clock throughout our days in Sri Lanka. We enjoyed their comradeship, hospitality, unceasing labour, and cheerfulness so much. A lesson in itself…. The very people we came to ‘minister to’ ministered to us.

On arriving at Meddakumbra somewhat unwell from the long and treacherous journey, we were greeted by the smiling face of Pastor Ranjith and his lovely wife, Selvee. Despite the late hour, the hospitality of the believers in Sri Lanka knows almost no bounds, and a lovely meal was served to the travellers who remained upright.

The next morning, we saw much of the beauty of this area, high jutting green mountains covered with tea plantations. We took a brief walk through the neighbourhood surrounding the church. Initially there was much opposition to the work here, but this day it was peaceful. We visited a house where a grandmother was raising two little children, who were brushing their teeth in the doorway. Her home was a one-room shed of cement blocks where one piece of fabric separated the sleeping area from the cooking area.

Later, there was a lovely welcoming ceremony for us, complete with flower garlands and the Pre-School children singing. Clean, bright, and cheerful, the schoolroom featured basic posters of the alphabet and simple plants and animals drawn by children and teachers.

We attended large meetings here, with people coming from many miles away, some having to spend the night on the floor of the church due to local bus transport failure, a frequent occurrence here.

As we departed the Hatton region we stopped at another village, Matale, to visit a church called Family Fellowship. This church building had been painted a cheerful yellow inside and everything was so neat and lovingly tended by the members. As the service began, nearby neighbours began playing extra loud television music. But God’s Word was not hindered, as Pastor Russ preached.

It was a joy to see young Pastor Kanna doing translation. When he paused for a word and looked to the back for assistance, on a word like ‘atonement’, Pastor Jayakanth or several of the other English speaking Sri Lankan Pastors or helpers would call out suggestions. This was done with big smiles all round.

We also visited a house church in Bambaragala, in a tiny cluster of homes. At first there was so little light in the house church we could hardly see, but soon, by willing hands, a torch was brought, and the worship service began in a packed room. Outside a cold wind whistled into the open doorways, but inside we were warmed with gospel preaching.

“We enjoyed their comradeship, hospitality, unceasing labour and cheerfulness so much.”

Here our new American friend, Pastor Russ Robinson, from Salt Lake City, USA, preached that the centre of Christianity is love, but how does love ACT? He said our sin is the basis for our compassion – God forgives us far more – so who are we to withhold any compassion we can render? Once again, in very basic conditions, a sumptuous meal was served after the service –many dishes, and more than enough food for our large group. How thankful we always were for the many delicious meals we were served on this trip.

The trip from the mountainous region over to the coast was much less harrowing as most of us slept. Those who didn’t were treated to a view of an elephant attempting to cross the highway in the dark! Finally arriving at Trincomalee, we were so grateful again, for clean and cosy beds and delicious meals served at all hours by Pastor Jeyakanth’s mother.

The next day we travelled to the Muthur area to witness a baptism in the ocean. There we rejoiced to hear Pastor Poh’s sermon to the large gathering, on what it really means to be a disciple. He explained that we must be given a new heart by the Holy Spirit of God and then we LOVE Jesus Christ and want to do what is right in his sight. How we rejoiced to see a young woman, and a much older lady, the wife of a Hindu priest, undergo baptism. It was solemn but beautiful.

The poverty here appeared extreme to us as it is among the worst of the drought-hit areas. We spent the rest of the day with the church, briefly assisting in serving food for the children’s meal, doing some Bible studies with the women, and working with the children.

What could be a better witness for Christianity than good Christian fellowship, real Christian kindness, hospitality and love and then, the thrill of seeing the gospel of our Lord Jesus Christ changing lives in what are often very, very difficult circumstances.

Later that day in Muthur, we gathered together with various Pastors who explained their prayer needs to us. How their trials abound! But their faith is still upheld by the Lord. This made such an impression on us! Despite their humble mentioning of ‘small’ numbers attending, the numbers they mentioned were in fact larger than most of our home churches!

Finally, we visited 6 Mile Post, first as observers and guests of a lively Sports Day organized by the Day Care Centre. Our only discouragement was here. This well-managed property, with clean, sound buildings, was in good repair and cheerfully painted, but the orphanage was empty for seemingly no other reason than malice against the Gospel – this was a sobering moment of what the Sri Lankan believers daily face.